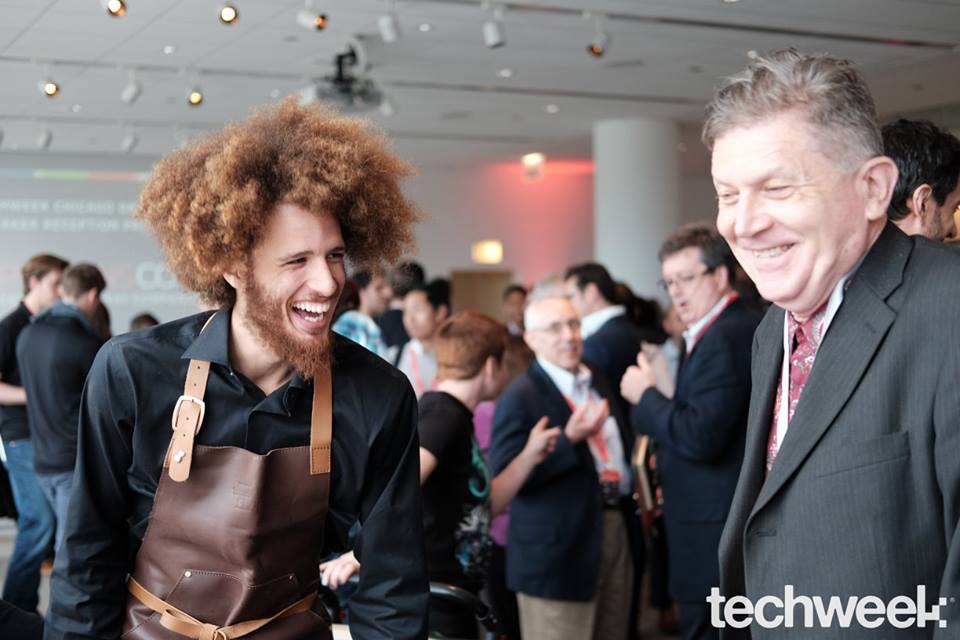 Speaking at a Techweek’s Growth Summit, Chicago Mayor Rahm Emanuel aptly summed up the Chicago tech scene saying, “Silicon Valley and New York City have technology industries, in Chicago we have a tech community.” There is no better example of Chicago’s community than the Techweek Gives campaign sponsored by Walker Sands Communications and DLA Piper. Over the course of 90 days, 37 tech companies came together to raise $1.6 million dollars and volunteer over 11,000 hours.

It was an intense competition with 22 different companies at the top of the leaderboard over the course of 12 weeks. At the end of the campaign ten leading technology organizations were at the top of the leaderboard based on a “per employee average” when giving money, time and goods to their favorite nonprofits. This equitable approach leveled the playing field for small (but mighty) companies who were able to compete along side with big organizations.

Techweek Gives encouraged greater engagement by allowing each participant to choose what cause they wanted to support. Seventy-five percent of the funds raised and time spent during the Techweek Gives campaign benefited Chicago-area students.

The winner of Techweek Gives, kCura, has a long-standing commitment to improving the lives of Chicago’s students through increasing access to technology. The mission of kCura’s philanthropic efforts, says Collen Smith, kCura’s Community Engagement Specialist is “to level the playing field for kids.” Helping to explain the astonishing $160,00 raised during Techweek Gives Smith explains, “It’s not a choice to give back; it’s a duty to our hometown.”

Three and a half blocks down the street from kCura, Synap, a relationship management software company with only six employees took second place on the leaderboard. Their success in Techweek Gives is a reflection of the giving culture that runs from through the organization. This September, Synap will sponsor Chicago Tech Rocks, a rock and roll fundraiser hosted by Synap co-founder Jeremie Bacon and other leading tech-companies including Songfinch.

Unlike the top two on the Techweek Gives leaderboard, Disrupt HR Chicago isn’t a tech company, but their commitment to give back made them a perfect fit for the campaign. As their name implies they aim to disrupt the corporate human resources world through the exchange of “rebellious” information. Their contributions to Techweek Gives were certainly disrupting. They claimed bronze in the competition by raising $62,150 in goods and donations and volunteering for over 1,127 hours.

While Disrupt HR Chicago focuses on improving connections within the corporate cubicle, WeCasa, Techweek Give’s fourth place finisher, is all about connecting friends who are traveling. WeCasa founder Christopher Deutsch says of the company’s participation in Techweek Gives, “Not only does [Techweek Gives] get at the core of what WeCasa is all about but it’s incited a movement that will long outlive the three month campaign.”

Ingrained in the fifth place finisher, Motorola Mobility, is volunteerism. Employees donate their time and share their tech expertise with programs and resources that aid Chicago youth. Motorola Mobility understands that serving their Chicago community “ensures a bright future for both Motorola and Chicago” according to Motorola Mobility foundation manager Monica Hauser.

The final five organizations on the leaderboard are representative of the diversity of tech-focused companies in Chicago. DLA Piper, a global law firm based in Chicago, snagged sixth place donating almost $900,000 in goods given during the 90-day period. Immediately succeeding DLA Piper is Clique Studios, a full service digital agency. “We view all of our work as connecting and improving the community. It’s never been a question of whether we would try to give back,” shares Brent Williams Clique Studios’ Director of Education. Clique University, their education program, holds classes throughout Chicago to share learned tech skills with the community.

The Chicago Leadership Alliance donated $44,000 in money and goods but is not content to stop giving back now that Techweek Gives is over. The Alliance is spearheading a new initiative, GoCivic, powered by uBack technology, to encourage tech companies to continue to give back to the Chicago community. ShoppingGives, a philanthropic platform that allows individuals to shop at their favorite online retailers while supporting a cause, is part GoCivic. The combination of GoCivic and ShoppingGives gives Chicago companies easy and versatile ways to support the work of organizations they care about.

Women Tech Founders (WTF) tells the stories of women currently succeeding in the tech field and encourages other women to pursue a career in the field. WTF sprinted for 90 days to improve the Chicago community with the same determination that women, a minority in the tech world, must show to overcome the challenges the frequently face.

Along-side the competing tech companies, uBack was thrilled to partner with Techweek, and sponsors Walker Sands Communications and DLA Piper to bring this to life and to make an impact for local youth.